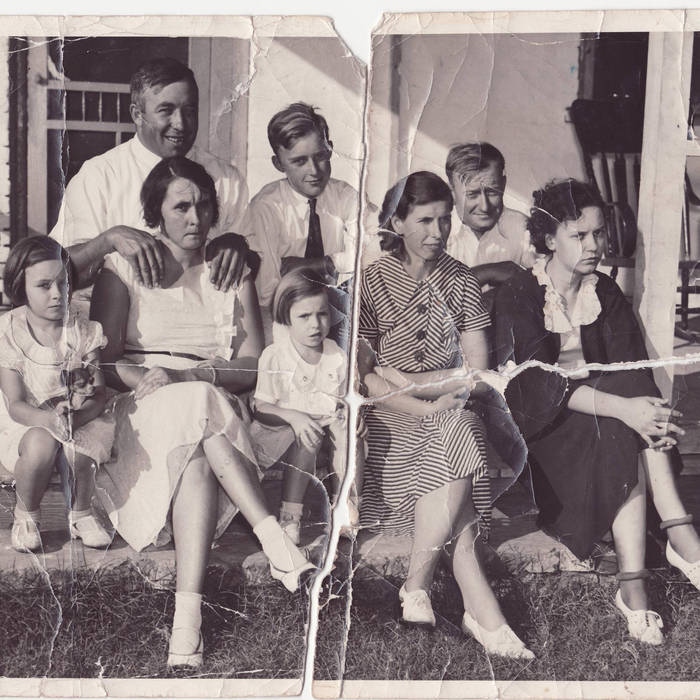 Hearts Must Change delves into the past. Almost at once, colour drains from its cheeks; it turns pale and then devolves into black-and-white. The music is an aural collection of recently-unearthed snapshots, showing a family of long ago. Nostalgia is powerful, and Kirill Mazhai’s ambient music longs to return, acting as a kind vehicle into a period long since buried. A sense of place, home, and belonging infiltrate the ambient air, but gentle overdriven fuzz frays the music.

The listener gazes into the depths of another lifetime whose past is retained and caged in a square image, one kept forever young even as its people age and pass on.

This photograph – this document - was once golden, and even though the people in the picture do not age, the actual photograph does. Worn at the edges and saturated in silent, leather-like textures, it’s a testament to the reality that nothing can escape change. Even hearts must change, but sometimes, that’s okay. The music reassures rather than frightens.

Mazhai’s music uncovers the story of a family. Footsteps, such a regular occurrence in the land of the living, leave ghostly imprints on the drone, and laughter echoes through old hallways on ‘Love Theme’. These sepia harmonies are romantic, holding an infinite amount of love and affection in their pulsating textures, but they’re faced with the inescapable, and the imminent rusting is brought on by the grainy distortion, helping to pixelate and decompose both image and period further still. Knitting the family back together, Mazhai’s music gives them a rebirth, if only briefly. The distortion is a light wrapping, dressing the music up in a comforting texture. Unlike most instances of distortion, it doesn’t become a cancer. The slow-to-form notes froth like a kinder version of My Bloody Valentine, its volume turned down a notch until it gently grates against a gloopy ambient mixture of infatuation and sincere love.

Using his sensitivity as a musician to oversee mastering duties, Ian Hawgood’s analog techniques seep into the record’s fabric, aiding in its discolouring and turning vibrancy to mould, with only a gentle soul of a harmony remaining; its corporeal body is left behind, no longer needed. Red turns to blue.

Every now and then we like to come up with something a little different (Little Library Book Edition: Cameron Day - The Castle and The Garden) and the design for 'Hearts Must Change' is one of our favourites for a long time, continuing the theme from last month's 'Little Notes' album! We have managed to source a family history caught on film dating from 1875 through to 1965 including old Langley and Kodachrome film negatives, Kodachrome red border film slides, vintage family photographs; all housed in beautiful stamped and hand numbered Kodak photo / negative wallets and rare vintage photo packs (Cameo series, Valentines snapshots, etc). Each package is completely unique with no two the same. The above also includes 2 x finger printed mini CD's and rests inside glassine bags, sealed with a paper clip. Also includes patchouli scent and download code. This one is most definitely for the collectors with a taste for nostalgia. Simply divine!

I have switched over to the more portable Nagra for most projects requiring reel-to-reel compression. I'm a huge fan of the newer Nagra works as well, and they are a truly remarkable crew of, I believe, around 25 people now. I don't want to give too much away but my more minimal approach to certain projects, and one I used for this, was to create two versions. I'll typically sit with a project for a day or two and listen on my monitors and then transfer to a crappy home stereo to make notes, also checking frequency charts from the tracks and album overall. For 'Hearts Must Change' I used an old Studer mixer with some lovely EQ and live mixed this onto both a Nagra 4.2 and on to my faithful Nagra VII. I use the same approach to most ambient work with well-produced work, but typically change between outboard EQ and the reel-to-reel based on the character of the work and what I was to get out of it. This is something I will typically spend a couple of days on just to give my ears a rest and approach different ongoing projects. I then bounced both versions back into my computer to test for any elements that needed digital adjustment and reference. And, without going into too many details, that's about it. - Ian Hawgood